At one point though, driving a car in Manhattan not only made sense; it meant "freedom," that tried and true American ideal.

In Winifred Van Duzer's excellent 1926 novel, The Good Bad Girl, 19-year old Mimsi comes to New York City from the small town of Tranquility. She wants to be an artist, but winds up subject to the great city's ebbs and flows of fortune, heartbreak, and danger.
(A couple of cads haunt the narrative, making Mimsi miserable). 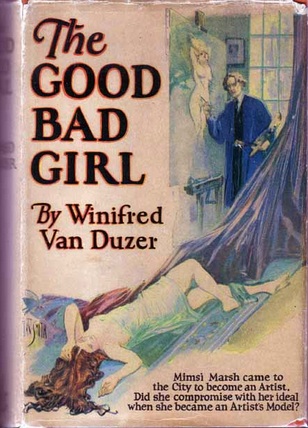 At one point, Mimsi is taken under the wing of a wealthy man who offers her sole use of his Washington Square home (yes, home) and his "roadster," which is conveniently stored in a nearby garage just around the corner.

All alone in the city, save for her white collie, Luck, a depressed Mimsi takes to sleeping during the day and driving through the city at night. She retrieves the great roadster from the garage and drives north through Manhattan at nightime.
Here, she finds herself again.

"Mimsi felt the heart-throb of the engine on the wheel under her palms and thrilled to the sure knowledge of power. Luck curled up on the seat beside her; she settled back. 'This is freedom,' she chattered to the dog. 'This is freedom, Lucky, dearest!'

Driving all night, Mimsi re-discovers her strength. She drives around the city and beyond its limits, night after night, racing along country roads and through towns that sleep in the darkness.

"On and on, sweeping through other little towns, along Main streets where drug-store windows blazed red and blue all night and the white steeples of white churches threw long shadows.
Past clever little houses where people lived. Contented people . . . A long stretch of road would unwind like a satin ribbon."
Mimsi finds freedom behind the wheel. She finally "conquers" the city by getting into the roadster and driving. This is just one aspect of Van Duzer's novel that provides a glimpse into popular attitudes concerning cars in the 1920s, and the ease of their use in Manhattan!
Indeed, Katherine Hepburn recalled her early days in New York in the late 1920s, early 1930s."I had the use of a car," she wrote. "You could park almost anywhere in those days." (Me: Stories of My Life, 87.)
New Yorkers were early adopters of the auto. In 1900, there were an estimated 8,000 cars in the entire U.S, and nearly a third of those were owned by New Yorkers.
"They raced them at City Hall Park and built getaway roads. William K. Vanderbilt II, a great-grandson of the railroad magnate Cornelius Vanderbilt, built a parkway on Long Island," observes Donald Albrecht, curator of architecture and design at the Museum of the City of New York and a co-curator of the 2010 exhibit. “Cars, Culture and the City,”
Those who did not own their own cars could still enjoy traveling through the city by car. Hailing hired cars (electric), which were charged at facilities around the city, was commonplace.

"The old resident of the city has become accustomed so gradually to the presence of the electric hansom and electric brougham on the streets of the metropolis that he gives no more thought to them than to the horse-drawn cabs and hacks, and the visitor accepts them as one of the many features of life in Manhattan that make it different from existence in his home city, and, while he finds it convenient and expeditious to order an electric carriage by telephone and be whisked rapidly from his hotel down to Wall street or to the railroad station or steamship pier, he has no idea of the extent of the service and the magnitude of the plants required for its conduct."

As the city's population opted more and more for the personal freedom of owning a car, the ease of driving in Manhattan came under threat. And by the late 1920s, as more and more cars appeared on the city's streets, residents became concerned with a new, modern problem: traffic. Construction was soon underway to try to address the problem.

The Holland Tunnel opened in 1927, the same year construction began on the West Side Highway. By 1929, the Triborough Bridge was under construction. (Get a glimpse of the city streets in The New Yorker's film of "side by side" driving in NYC, 1930s and today.)
Soon even automobiles had places to rest in the city when not in use. The "hotel for auto" (also called an "Auto Inn") made its appearance. You can read more about those here. 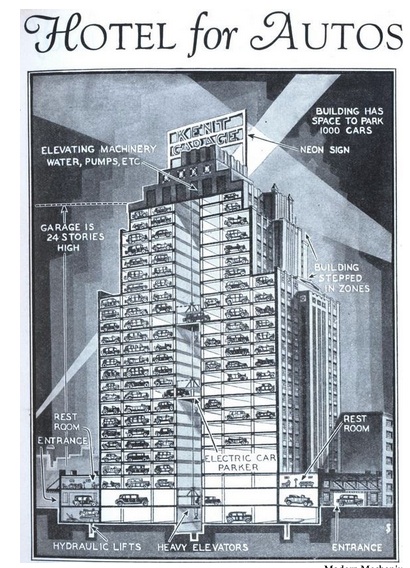 The ease of driving in New York would, of course, gradually disappear, going the way of the hired hansom electrics. Still, in so many novels, memoirs, and films of those early days, the "freedom" of driving in New York evokes something so chic, so cool, and so downright "New York." Many a film scene centers around the characters' ability to pull up in front of their destination and go on with their business with little concern for that modern-day and agonizing challenge: finding a parking spot. (See the opening scene of Noah Baumbach's The Meyerowitz Stories: New and Selected for a pitch-perfect portrayal of the parking spot challenge in New York.)

Posted by Jenny Thompson at 4:26 PM