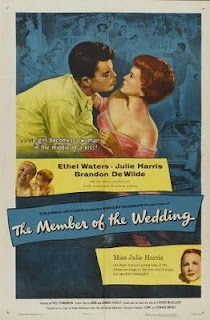 Betty Smith's bestselling wartime novel, A Tree Grows in Brooklyn (1944) was a nostalgic tale of girlhood in turn-of-the-20th century New York. Her postwar novel, Tomorrow Will Be Better (1948) was a riveting story of a young couple's struggle with money, marriage, and work. Both novels are domestic portraits of the American past, and each, although optimistic, is rather dark--the novelistic "film noirs" of the domestic fiction scene.

Two other postwar novels:A Member of the Wedding (1946) by Carson McCullers (1917-1967) and Gentleman's Agreement(1947) by Laura Kean Zametkin Hobson (1900-1986)also fall into the domestic film noir novel category. Both chronicle the dramatic relationships between individuals within a postwar state of uncertainty, racism, and desire.

Hobson's novel was famously made into a 1947 movie starring Gregory Peck, Dorothy McGuire and John Garfield. The theme of anti-semitism, explored in both the novel and the film, is framed through the love story between the two main characters. The dark side to their relationship--war, housing crisis, anti-semitism, and racism--seem to crowd in around them, turning their desire for domestic bliss into somewhat of a desperate and rather sad affair. Solving problems of American postwar life, according to Hobson's story, won't be easy.

McCuller's novel shares the same dark setting--a world broken by war, a country torn by racism and poverty. McCuller's central character, Frankie Adams, has one desire: to belong. To be the "We" of "Me." Her closest friends, domestic servant, Berenice, and young neighbor, John Henry, are not enough. The world seemed to be taking sides, after all, so why shouldn't she?

But like Hobson's novel, McCuller's story also asks us to view the idea of a blissful domestic side of American life as something that is both threatened and threatening. A happy life of belonging, fitting in, being fulfilled, and living happily ever after is something that McCuller's presents as a myth--something impossible not so much because of the larger world at war, but because of America's internal wars and strife: conflict among classes, genders, races, and institutions.