Signs of the Time: Federal Art in NYC 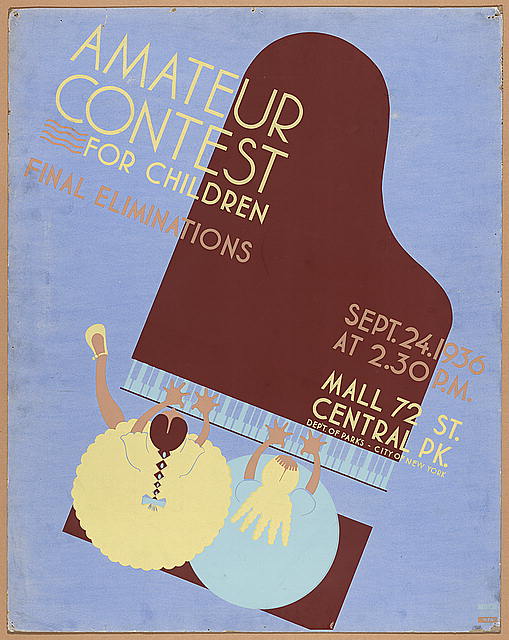 Over the course of just a few golden years, from about 1935 to 1939, in New York City, the work of those artists was visible everywhere, from the theater marquees advertising a production to posters displayed on the streets.
A 1936 poster series on the "History of Civic Services in the City of New York" put illustrators to work and documented the city's progress over the years in relation to public works. These patriotic history lessons had a number of intentions, primarily to promote the arts and promote civic pride. But they also had an underlying goal: to place current hard times within a larger historical context that emphasized the fact that the depression was only one tale in a far larger historical narrative. (Collectively, it was WPA illustrators whose posters very nearly "branded" the 1930s and created the visual theme of the Great Depression--truly stunning work.)


Actors, directors, costume designers, playwrights and scene designers found a temporary home in New York theaters that produced productions sponsored by the Federal Theatre Project (FTP).  A total of 15,000 people were employed by the FTP, and roughly 1,200 productions across the country were staged (radio productions were also supported by the project).

FTP director, Hallie Flanagan (Davis) hailed the project, proclaiming: "For the first time in the relief experiments of this country the preservation of the skill of the worker, and hence the preservation of his (sic) self-respect, became important."

The FTP folded in 1939. (The U.S. House Un-American Committee accused its practitioners of what else? being red.)

African American performers were supported in a separate section of the FTP, known as the "Negro Unit." NYC's unit was one of the country's most popular and successful, staging roughly 30 productions.

In its first year, in 1935, two white directors, Orson Welles and John Houseman, served as the unit's directors. A "Voodoo" Macbeth, set in the Caribbean, was staged by Welles in 1936 at the Lafayette Theatre  in Harlem. The production later went on tour. (See below for a film clip of the production.)

Posted by Jenny Thompson at 4:03 PM