Hey, girl, is that guerrilla art? The Fearless Girl, the Charging Bull, and the Public Square

In March 2017, the statue "Fearless Girl" by Kristen Visbal, became famous after being left in the middle of the night to stand in an apparent face off with the statue "Charging Bull" in NYC's financial district. (© Charging Bull, Arturo Di Modica, 1989) The piece, and its relation to the bull, was interpreted as a kind of act of defiance, an anti-establishment piece of art of and for the people, etc.

Read more »
Posted by Jenny Thompson at 6:16 PM No comments:

Read more »
Posted by Jenny Thompson at 1:07 PM No comments:

Behind the Scenes in a Restaurant

In 1916, the Consumers League of New York City issued a study of 1,017 Women Restaurant
Employees. Titled, Behind the Scenes in a Restaurant, the study offered insight into the working conditions and ostensibly sought to bring about changes in laws regarding women working in the industry.
Read more »
Posted by Jenny Thompson at 6:09 PM No comments:

Read more »
Posted by Jenny Thompson at 4:26 PM No comments:

"Romance novel" is a useless phrase. Let's just stick with "novel," shall we? And thus we can take a look at one of the United States' most successful writers: Faith Baldwin (1893–1978). Over the course of her career, she published roughly 100 novels, wrote for various magazines and newspapers, and saw some of her novels turned into films (eg, Wife Versus Secretary 1936). Her first published piece (a poem) appeared in the Brooklyn Daily Eagle in 1907 (see below). Her first novel was published in 1921, and her final novel appeared in 1977. "She writes about people you know," reads the copy from one of her novels. "The girl next door, the young man who rides down on the elevator with you, the people in your office." Baldwin's novels focused on women's lives, their relationships, dreams, families, marriages, careers, and challenges of the modern world. The setting for the vast majority of her novels: Why, New York, of course! Brooklyn, to be exact.

Read more »
Posted by Jenny Thompson at 4:42 PM No comments:

Actor Warren William (1894 – 1948) has been called the "king of pre-code" Hollywood.  At the age of 26, he first appeared on Broadway, enjoying a successful run on the New York stage before going West under contract with Warner Bros.

In films, William was best known for playing a ruthless tycoon, a man who seeks money and power; a man who disposes of women easily and heartlessly, the kind of character who "made life his plaything,"  in the words of a trailer for his 1934 film, Bedside.

Many of his films portray New York City in the 1930s; a portrayal that offers a rather biased view of the metropolis: the city was a jungle, a trap, a den of immorality that dazzles and seems to promise everything, but ultimately only destroys.

Read more »
Posted by Jenny Thompson at 5:50 PM No comments:

My husband left me four years ago. Why--I don't precisely understand, and never did. Nor, I suspect, does he. Now, in these waning days of 1929 when the world may be tumbling about our ears, that other catastrophe and its causes are matters equally inconsequential. ~ Ex-Wife, 1929


In 1929, a novel titled Ex-Wife was published by Jonathan Cape publishers. The book, published anonymously, "caught readers' fancy," and made the bestseller list. Many readers were shocked and astonished at the racy story of a woman who, divorced from her "heel" of a husband, takes up relationships with other men, along with a cocktail or two, and even takes up her own career!

She rooms with an artist friend in the Village, attends parties and "first nights" in the city, she shops, she pays attention to her clothes, perfume, and other details, and she loves to find love in the arms of a handsome male friend--RACY!

Who had written such a truly modern story of a young woman in 1920s Manhattan, navigating men, work, and the impact of the "Aspirin Age?"

Read more »
Posted by Jenny Thompson at 6:38 PM No comments: 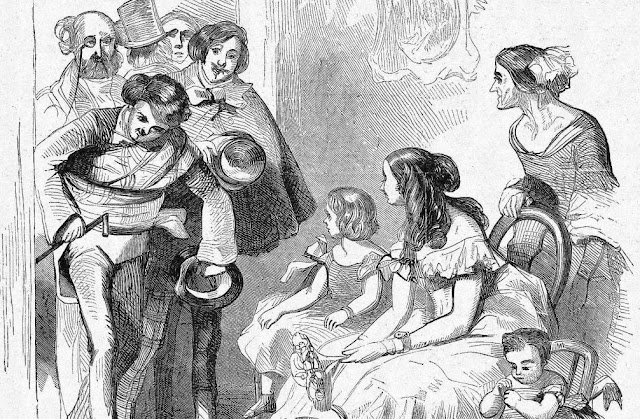 Mrs. Pegu, and drawing-room, are all laid out in state to receive New Year's calls.  Thirty-two young gentlemen make a brief appearance at the door, and recite the following shibboleth:  "How d'ye do, Mrs. Pegu.  Happy New Year.  Can't stay a minute.  Made seventy-six calls this morning; got thirty more to make. Adoo! Adoo!" The young gentlemen vanish, to be succeeded by others.

Read more »
Posted by Jenny Thompson at 5:58 PM No comments:


"I think the doorman is just as important as the guy who owns the building," real estate broker Luis D. Ruiz says in an episode of Bravo's Million Dollar Listing, New York (MDLNY). "Because you never know where a deal is going to come from." (Watch a trailer for the show here.) Ruiz is one of three New York real estate brokers - and reality TV personalities - who make up the cast of the popular and fascinating show that will next air its 6th season.

Hellward, New York? The Shimmy Dance and Other Indecencies